TKK Nature works naturally against the yellow, respiratory and intestinal problems. If there is yellow, other diseased symptoms often follow. It is therefore important to keep the yellow well under control. Backs TKK Nature was developed for this purpose

TKK Nature works naturally against the yellow, respiratory and intestinal problems. If there is yellow, other diseased symptoms often follow. It is therefore important to keep the yellow well under control. Backs TKK Nature was developed for this purpose. The test boxes discovered that active yellow was found to be almost motionless in the body after a few weeks.

Because of the background information on increasing antibiotic resistance, we believe that this is the way we should go. the natural way. A large majority of the test lofts could opt for antibiotics altogether or for the larger part. In some lofts the yellow turned out to be very persistent.

That is why TKK Nature has been made even more powerful. The losses of the youngsters turned out to be generally less than in previous years and also hardly E-Coli was found on the test lofts. 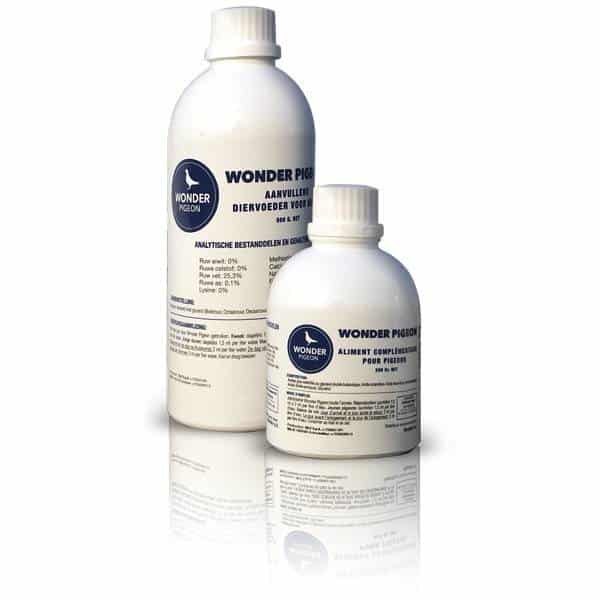 Wonder Pigeon is a supplementary feed which was developed specifically for racing pigeons. It is composed of a proprietary blend of monoglycerides and diglycerides of butyric acid, caprylic acid, carpinezuur, propionic acid and lauric acid.

DarmFit contains butyric acid and medium-chain fatty acids, which increase the intestinal health of poultry (chickens, quail and ducks). The butyric acid is active in the intestine, supports the growth of villi and thus leads to a higher immune defense.

Recup-Lyt is a unique blend of electrolytes on a carrier of glucose. This dietary supplement ensures a balanced water balance in tissues and organs, helps the pigeons to recuperate quickly after the competition

What is Con Brio? Con Brio is an all-natural product, based on two essential oils: eucalyptus and peppermint, combined with organic menthol from the peppermint plant. The water-soluble formula can be used in both water and an atomiser spray.

ELECTROLYT is an oral solution containing essential electrolytes for pigeons. Treatment of dehydration in consequence of diarrhoea.

Immunbooster promotes the attention and reaction speed of the immune system and thus the health of the pigeons from the inside.