CLINEE-TRIL is a soft liquid concentrate composed of
natural minerals and trace elements.

Restored, dissolved in water, the biological balance in intestinal and digestive tracts.

Gives your pigeons more condition and shape, resulting in, among other things, greatly improved FLIGHT RESULTS

and less loft losses for young pigeons. The pigeons become much more lively.

Promotes the fertility of your pigeons and has a purifying effect.

Builds extra resistance against various bad influences from the outside.
Dosage:

Give 2 ml. CLINEE-TRIL on one liter of drinking water, once a week. Clinee-Tril is also allowed as a cure,

are given several days in a row and can be used throughout the year. So also in the moulting period.

Other: H2O supplemented to 100%. And a certain ratio of oxygen and hydrogen parts.

Sodium has an influence on the construction of proteins and Chlorine has an important effect on the salt formation in the stomach.
Together they exert an effect on the water balance of the body. Sodium also activates certain enzymes.
With an acute defect, it can lead to the following symptoms:
Disturbances with regard to the metabolism;

Disturbances in kidney and brain functions.

magnesium (magnesium phosphate) and as such plays a role in the construction of the bone system.
As a phosphoric acid, phosphorus plays a very important role in the energy supply.

responsible for the oxygen transport from the lungs to the body cells.

all tissues and organs. Deficiency also indicates poor emergence of the young, infertility and slow reactions to the external signals.

Be the first to review “BCS CLINEE-TRIL 500ml” Cancel reply

It supports biological balance in the gut and digestive tract. 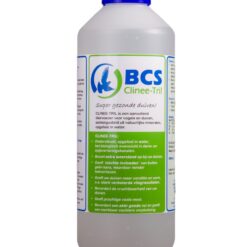 CLINEE-TRIL is a soft liquid concentrate composed of natural minerals and trace elements.